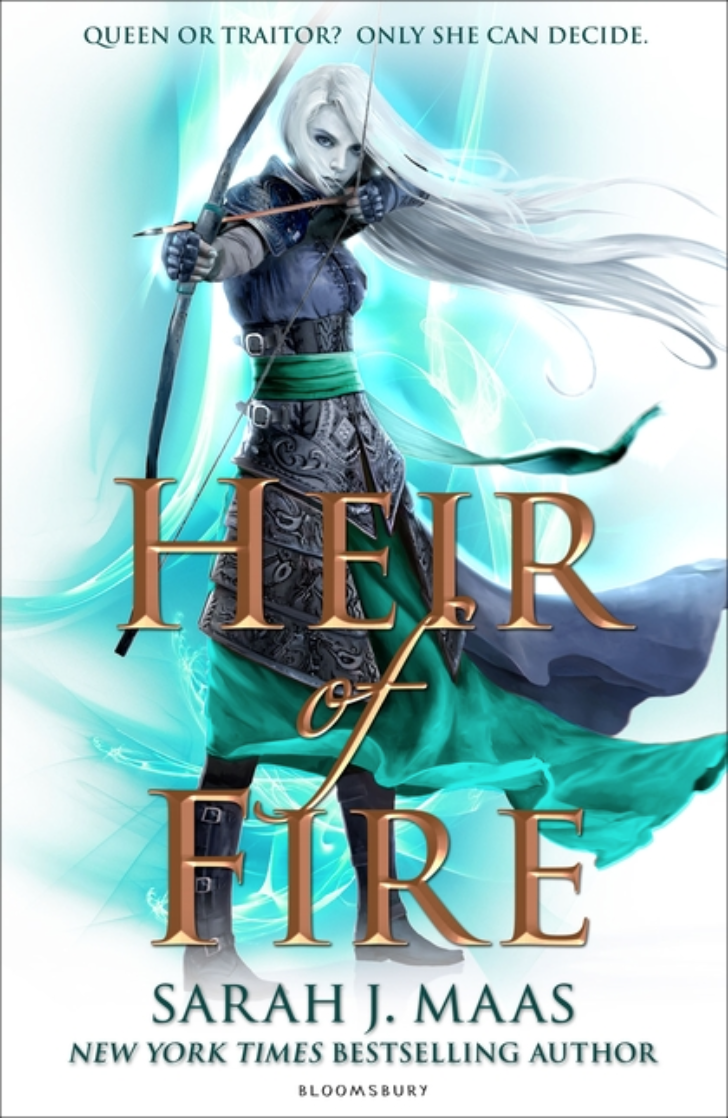 Lost and broken, Celaena Sardothien's only thought is to avenge the savage death of her dearest friend: as the King of Adarlan's Assassin, she is bound to serve this tyrant, but he will pay for what he did. Any hope Celaena has of destroying the king lies in answers to be found in Wendlyn. Sacrificing his future, Chaol, the Captain of the King's Guard, has sent Celaena there to protect her, but her darkest demons lay in that same place. If she can overcome them, she will be Adarlan's biggest threat – and his own toughest enemy.
While Celaena learns of her true destiny, and the eyes of Erilea are on Wendlyn, a brutal and beastly force is preparing to take to the skies. Will Celaena find the strength not only to win her own battles, but to fight a war that could pit her loyalties to her own people against those she has grown to love?

Sarah J. Maas’s Heir of Fire is a fantastic novel written by a truly captivating author. Always surprising, Maas’s writing transports you to another land that is rich in history and culture. Previously, I would have classified the Throne of Glass series as a 'low fantasy' despite its second world setting, however, Heir of Fire sits squarely in the epic fantasy realm and has reignited my dormant love for the genre.

The world of Heir of Fire is much more complex and diverse than touched upon in Throne of Glass. Maas has cleverly expanded her world with each book, allowing her to delve deeper into her mythology and the characters she’s created, without overwhelming the reader with backstory.

While Throne of Glass was a more personal journey of Celaena’s transition from slave to Adarlan’s Champion, Heir of Fire explores the broader scope of Erilea’s people and their dark history. The grand locales, various regions, cultures and magic systems are completely immersive. There's not a moment that lags, which is impressive considering the novel’s length.

Celaena is unlike any YA protagonist I’ve read before; she’s often foul-mouthed, ill-tempered yet fragile and broken. Heir of Fire is particularly satisfying due to Celaena’s character arc. She was left shattered by the events of Crown of Midnight, and none of these events are forgotten in Heir of Fire. These events drive Celaena’s actions, they become a part of her. It’s thrilling to watch her journey unfold and witness the empowering rebirth of a hero.

While some could argue that the new characters in Heir of Fire dilutes the reader’s connection to the main protagonists: Chaol, Dorian and Celaena, Maas has the knack for rendering complete, flawed and empathetic characters where each addition improves upon the diverse cast. My favourite new character was Manon Blackbeak, a witch with iron teeth and claws who’s ruthless in her ambition to lead her clan. The cinematic chapters detailing the witches trials to train their Wyverns, dragon-like creatures, are so distinctive it’s as though Manon has clawed her way into Heir of Fire, regardless of Maas’s original plans. Manon is a fresh and wonderful addition to the Throne of Glass world and I can't wait to see where she journeys next.

I have to admit, I missed the main romantic thread that was dominant in Throne of Glass and Crown of Midnight. Heir of Fire is a darker book, with serious themes of loss and sacrifice. Instead of focusing on romance, Maas’s shifts to follow the budding friendship between Rowan and Celaena. Their relationship is a kind of love story that slowly unfolds and it is a joy to observe—this is what it feels like to read Maas’ novels, as if you are witnessing the dynamics of real, flesh and blood people as opposed to reading the stories of fictional characters.

Heir of Fire is an outstanding entry in the Throne of Glass series, there are no symptoms of the dreaded mid-series slump here. My only complaint is that I must now wait a year or so until I discover the fates of all the beloved characters—both new and original.


*Many thanks to Bloomsbury Publishing Australia for the advanced reader copy.