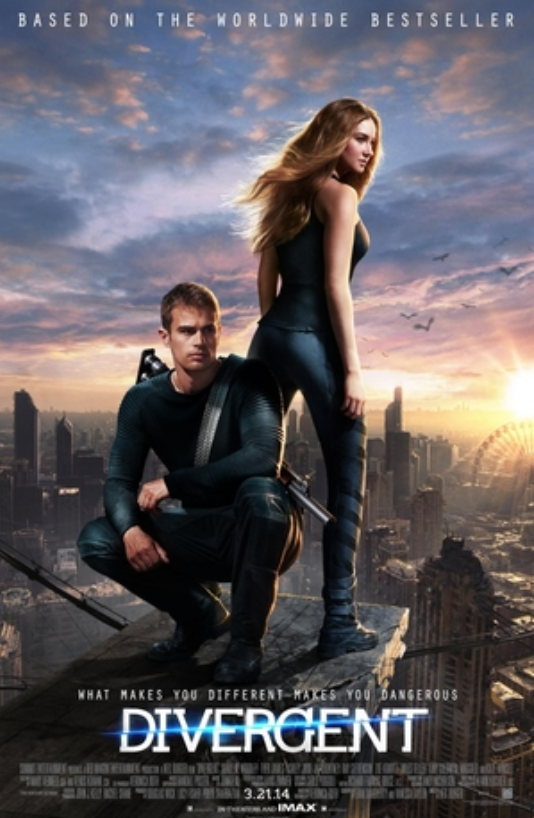 From a box office perspective, Divergent is already a success with the current takings at over $124 million. Consequently the sequels have been green-lit and there’s talk of splitting the third book into two movies to further extend the franchise’s success and box office takings. As a fan of the novels (mostly books one and two, with less affection for book three) I’m not surprised at the film's success.

Author Veronica Roth created an intriguing dystopian world where the remnants of society are divided into factions, driven by one virtue: Abnegation (selflessness), Amity (kindness), Erudite (intelligence), Candor (truth) and Dauntless (bravery). At the age of sixteen, each member of the community participates in a test to assist in choosing a faction and either stay with their families and the faction they were born and raised in, or deviate and never return. Only sixteen-year-old Beatrice Prior’s test is inconclusive, receiving multiple faction results. She is ‘Divergent’, someone who can’t be controlled. Being Divergent, being different, is dangerous to the stability of this society. Beatrice (later renamed Tris) must choose a faction and hope she is not uncovered for being Divergent.

Divergent is a well made film and the grey crumbling Chicago, in which the society lives, is eerily beautiful. The film's beginning made me hopeful that this was going to be a moody, tense film about differences, finding yourself and standing up for what you believe in. However, I found myself questioning the world’s logic. In the novel, it’s easier to accept that a war could have fractured the community into such distinct segmentations. However, on the big screen, seeing everyone dressed in their faction colours and behaving only within the confines of their faction’s virtue, was more difficult to accept.

This is one downfall of dystopian novels; the author has to completely break the world as we know it to be able to create a character, or characters, that will then stand and fight the new order. And sometimes it's broken to the point of unbelievability. Unfortunately, having only one virtue that defines you (aside from the Divergents) results in the characters being one-dimensional and hard to relate to.

Tris is often a difficult character to connect with, which unfortunately tainted my impression of Shailene Woodley’s portrayal. The novel is written from Tris's perspective so we gain a clearer understanding of her thoughts and actions that are absent in the film. There’s a greyness to Tris, and not just because of her clothes, but because she’s grown up in Abnegation where they’re taught to never think of themselves. This means Tris is a bit of a blank canvas, a work-in-progress: a “Stiff”. She thaws out a little during the movie, the scene where she zip-lines through the night’s sky is particularly satisfying, but unfortunately most of the time she feels a little out of reach and detached.

We need to be able to connect to our main character, it’s through her eyes that we see the film and garner our feelings and expectations. I wanted to love this film, to feel something, but unfortunately I was left somewhat apathetic. There needed to be more humour, more anger, more heart. Tris goes through hell, however I felt like I wasn’t taken along for the ride.

This is not to say I didn’t enjoy the film, I did. Theo James was well cast as Four, although standing next to Shailene Woodley, their age gap was a little too apparent. He did the strong and silent type with a hidden soft side successfully and I could see why he would catch Tris’s eye.

Kate Winslet played an entertaining villain and I also enjoyed Tris's friendships with her new Dauntless friends Christina (Zoë Kravitz) and Will (Ben Lloyd-Hughes), this gave her more warmth as a character. The action scenes and visual effects were impactful and effective and there was real suspense towards the end of the film, although I knew the ending.

Whilst I didn’t love Divergent as much as I’d hoped, it is a successful, and fairly faithful, film adaptation. Insurgent is a superior book in my opinion, so it will be interesting to see how the second film turns out.

Have you seen it yet? What did you think?