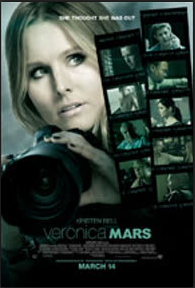 For years the future of the cinema-going experience has been in question, its downfall predicted since the invention of television. Further doubt was cast over its longevity with the release of cable TV, on-demand downloads and home theatres. The question remains: will people continue to venture out into the world, sit next to strangers while they eat noisy and odorous foods and pay over $20 to watch a film that may or may not be worth the money? Well... I believe the answer is yes. There’s something magical (I know… I use that word a lot) about going to the cinema. It’s not just about the film, but the experience.

Last night was the most exhilarating movie-going experience I’ve had for a long time—probably since seeing James Cameron’s Avatar at Imax on release day. There was a tangible hum of excitement and pure joy in the air. And this wasn’t due to ground-breaking visual effects or eye-popping 3D, but rather the return to a great story. And that great story was Veronica Mars.

I’ve been a Veronica Mars fan, or a Marshmallow as we're called, ever since the TV show aired back in 2004. The show was fresh, witty, contemporary, compelling, often heart-breaking, mysterious, adventurous and jam-packed full of lovable 3-dimensional characters. Plus the actors were all superb in their roles; I still believe Kristen Bell, who plays titular Veronica Mars, is the most underrated actress of her generation. And I have yet to see any other first season of a TV show that is as satisfying. I was hooked early on, although, sadly I was in the minority. The show was abruptly taken off air in 2007, ending on a cliff-hanger—much to my horror. I've never fully recovered from the loss of Veronica Mars, surviving only by re-watching the series annually.

When I heard there was going to be a movie, brought to life by Kickstarter and dedicated Veronica Mars fans, I was ecstatic. I looked forward to any chance to see the beloved characters on-screen again. But what I wasn’t prepared for was how great the film would be, and even more surprising was how large the Veronica Mars fan base had grown since 2007. Suddenly, it appeared as though everyone had, or was, watching the show. The cinema was packed, not a spare seat in sight—in fact tickets sold out in less than 20 minutes. It was wonderful to see such enthusiasm.

The movie is set 10 years after teenage sleuth Veronica Mars graduated from high school. She returns to her seedy hometown of Neptune, after receiving a call from old flame Logan Echolls (Jason Dohring) who finds himself embroiled in (another!) murder scandal. That boy has some serious bad luck*. Neptune has gone downhill since Veronica left at 19, when she decided to turn her back on her instinctual private investigatory ways and study law. Lucky for us, she decides to return to Neptune for one last case...

Veronica’s homecoming happens to coincide with her 10-year high school reunion; a party that is so over-the-top and packed full of gleeful cameos it had the audience leaping off their seats with enthusiasm. Not only is Veronica returning home to reconnect with old friends and loved ones, but we are too.

The movie also contains various kicks to the stomach with twists and turns I didn’t expect, although I should have, considering the masterfully twisted plots of the TV series. It is action-packed, funny, sharp, heart-warming, heart-wrenching and bursting with Veronica Mars inside jokes and nostalgia. I’ve never sat in a cinema surrounded by such enthusiasm. People were laughing, clapping, gasping and crying out in glee and shock at every turn. I was surprised that the entire audience didn’t break out into song when The Dandy Warhols’ “We used to be friends” played at the end of the film. For a Veronica Mars fan, the film is perfect. The only issue I had was that it ended.

I don’t believe I would have enjoyed the film as much if I had watched it on my computer or TV. Movies are meant to be shared with others and I cannot thank Hoyts Australia enough for screening Veronica Mars for us Aussie Marshmallows. And, of course, thanks to Rob Thomas for creating such wonderful characters and stories. Please don’t make us wait another seven years for the next instalment!

For those of you who have no idea what Veronica Mars is all about, I urge you to buy the TV series. Then watch the movie and let me know what you think. You won't be disappointed!