Review: A Court of Thorns and Roses by Sarah J. Maas 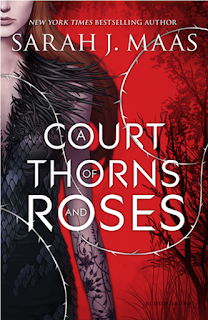 Feyre's survival rests upon her ability to hunt and kill – the forest where she lives is a cold, bleak place in the long winter months. So when she spots a deer in the forest being pursued by a wolf, she cannot resist fighting it for the flesh. But to do so, she must kill the predator and killing something so precious comes at a price ...

Dragged to a magical kingdom for the murder of a faerie, Feyre discovers that her captor, his face obscured by a jewelled mask, is hiding far more than his piercing green eyes would suggest. Feyre's presence at the court is closely guarded, and as she begins to learn why, her feelings for him turn from hostility to passion and the faerie lands become an even more dangerous place. Feyre must fight to break an ancient curse, or she will lose him forever.
The start of a sensational romantic fantasy trilogy by the bestselling author of the Throne of Glass series. - See more at: http://bloomsbury.com/au/a-court-of-thorns-and-roses-9781408857861/#sthash.rbw3wOcO.dpuf

A Court of Thorns and Roses is a majestic tale of passionate romance, dark magic, brutal sacrifice, mysterious creatures and cursed kingdoms. Based on Beauty and the Beast, it is a strong start to a new trilogy by talented author Sarah J. Maas. It’s a tale that will capture you in its web, and refuse to let go—even beyond the final page.

The novel begins with Feyre diligently providing for her family, which is often a thankless task, but she is the only one who capable of protecting them. In A Court of Thorns of Roses, a wall separates the mortal lands from Prythian, the faerie lands, and humans know better than to venture north or interfere with the dangerous and powerful faeries.

It’s not long before Feyre shatters the treaty between the lands by mistakenly killing a faerie in wolf form. Her punishment is to live above the wall in a High Fae’s estate, never to see her home or family again. Here she meets her “beast”, Tamlin—a faerie with a jeweled mask permanently attached to his face, a short temper, and who hides a cursed past.

Like Celaena Sardothien from Maas’s Throne of Glass series, Feyre is tough and often abrasive, but still empathetic. Although, I wished there had been a deeper connection to her family, as this would have made her punishment more poignant. The faerie characters of Tamlin, and particularly Lucien, were a delight. They were, at times, both animalistic and chivalrous, and their bejeweled masks added to the level of mystery and magic in the novel.

As I read on, Tamlin and Feyre became more than just characters on a page but people with real thoughts and feelings, and I feared for their future in a world that seemed to conspire against them. It is a rare book that manages to live and breathe between the pages, and A Court of Thorns and Roses was that kind of book for me, a testament to the strength of Maas’s writing.

Towards the end of the novel, the plot turns bleak and frequently bloody and brutal, yet it was all the more exciting for it. Sarah J. Maas’s imagination seems to know no bounds; her faerie world is equal parts beautiful and disturbing and I found myself wishing my time within this world would not end.

My one caution with this book would be that it is being shelved with other YA titles, where I believe it reads much more NA (New Adult). A Court of Thorns and Roses should be read by those looking for something a little darker, and steamier, than most YA novels.

Sarah J. Maas can do no wrong in my eyes. She has proven time and time again that she is a master of fantasy: building sumptuous worlds to be lost in, complex characters and unexpected plot twists and turns. I loved my journey into the world of Prythian, and cannot wait to return.

I give A Court of Thorns and Roses 5/5 stars.

*Many thanks to Bloomsbury Australia for the advanced readers copy.
Posted by Astrid Scholte at 17:20